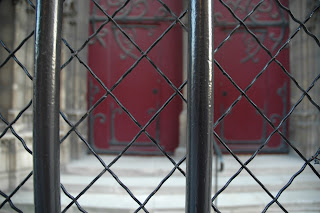 Newsflash:  that person who you used to be madly in love with has not actually turned into the Devil.  Your ex is a human being and all people have better and worse days and are not so nice at times.  This is especially true during a divorce.  From what I have seen (and I have seen a lot), divorce can bring out the worst in people.  Seriously, the ever loving worst.  I once read a piece written by a very seasoned divorce attorney from New York who wrote -- I'm paraphrasing -- something like: Divorce brings out the worst in nice people and makes mean people look like the Devil.
It is not a happy time.  Volumes have been written about the most common and difficult types of life transitions.  Breakup of a marriage is always toward the top of the list, along with death of a loved one and financial troubles.  In a way, divorce incorporates these other major transitions in that it is the "death of a relationship" and for the majority of divorcing people, financial health takes a hit.
And it is not only the exes who become intolerable -- lots of people look at themselves (at a point when the hurt and anger and frustration have died down and is replaced by a little more objectivity) and realize they don't like the person they became during their divorce.  Like I said, divorce really does bring out the worst in people....
A relevant article in "Psychology Today" evoked Maslow's ranking of human needs to say that in divorce, every basic human need is challenged and therefore, it is human to act out aggressively against these threats.
Of course, my purpose in writing this piece isn't to justify anyone being a jerk or to make anyone feel bad for being a jerk themselves.  I am writing to shine light on this phenomenon that happens, to acknowledge that divorce can often trigger the "jerk response", and to suggest that if you catch yourself thinking your ex is an a----le, or berating yourself for being a bad person, take a deep breath and try to remember we are all capable of becoming the Devil and thankfully it is usually a temporary condition.  Of course, when that condition in your ex doesn't dissipate, it's good to rely on your trusty attorney to deal with the mess....
~~
Citations:
https://www.psychologytoday.com/blog/contemplating-divorce/201101/why-are-divorcing-people-often-jerks


Posted by Karen Juster Hecht at 6:12 PM No comments:

Karen Juster Hecht
I am a Mediator and Divorce Coach. My physical practice is in the Bay Area, CA; my virtual work is worldwide. I write this blog with the hope that I can help people navigate through their divorces and life transitions in a peaceful and sane manner. My own difficult divorce, my years as a courtroom litigator, and my varied life experiences give me indispensable real-life insights into the issues faced by my clients. I enjoy listening to my clients and meeting them where they’re at as we work together to build holistic solutions for their lives. I keep my practice small and manageable, which allows me to give my clients personalized service. My keen discernment and understanding of human nature serve me well in my work helping people sort through disputes, where emotion-based realities play a major role. ~ You can reach me at karen@karenjusterhecht.net and read more about my work at: www.karenjusterhecht.net ~ DISCLAIMER: The purpose of this blog is to provide information. Nothing on this blog constitutes specific legal advice and no attorney-client relationship is created. If you seek legal advice about your matter, you should search out an attorney of your choosing.